In 1977 a group of cross country skiers in Mount Beauty, a small mountain valley town in north east Victoria, decided to form a cross country ski club. Some of them had skied in Norway and taken part in the Norewegian Birkebeiner Ski Race and thought that Birkebeiner would be a good name for their club. Two years later, in 1979, the Birkebeiner Nordic Ski Club decided to hold their own version of the famous Birkebeiner race and the 21km Australian Birkebeiner was held with some 80 participants, all carrying a 5kg pack (the pack symbolised the weight of Prince Haakon part of the original Birkeberiner legend). The course started and finished at the alpine ski village of Falls Creek, and took participants out into the wilderness area of the adjacent Bogong High Plains

The Club ran this event for ten years to 1988, and in early 1989, in a decision that seemed very simple at the time, it was decided that since they had the best ski race in Australia there was no reason why it should not become part of the Worldloppet series of marathon ski races that a small but growing number of Australians had travelled overseas to take part in.

Could a small local ski club conduct a 42km event? The easiest way to answer the question was to do it. In 1989 a 42km event named the Australian Birkebeiner Ski Marathon was held and the organisers also included a half distance of 21km called the Birkebeiner and a 7km event called the Birkebeiner Lite. The race was conducted in the classical style as that was the tradition of the original race in Norway and as adopted by Australia. Following the success of this event it was "all systems go" to work towards becoming a member of Worldloppet.

After a lot of communication, mainly by fax (remember those good old days before email) representatives from the Birkebeiner Nordic Ski Club and the Australian Ski Federation headed off to a Worldloppet Annual Meeting in Haamaliina (FIN) in June 1990 to put the case for a southern hemisphere race in the series. Their main task was convincing the assembled northern hemisphere folk that there really was snow in Australia.

The meeting decided that before being admitted the club had to demonstrate to Worldloppet that Australia could conduct a world class citizens cross country ski event. So another trial event had to be held. In 1990 The Australian International Ski Marathon with a half distance of 21km called the Australian Birkebeiner and a 7km race called the Birkebeiner Lite were conducted in late August. It was decided to change the style of skiing the event from the traditional classic to the free technique which meant skiers could use the classical style or the skating style or a combination. The organisation, course layout, local infrastructure and participants were assessed by a delegation made up of Rolf Kjaernsli (NOR), Robert Steiner (AUT) and Tom Duffy (USA) and their report was discussed three months later at a special Worldloppet Meeting in Munich. The result was that Australia became the 12th member of Worldloppet but with one important proviso... a new name. Worldloppet already had two Birkebeiner events (Norway and USA) and two Ski Marathons (SUI and JAP). Australian Birkebeiner or Australian International Ski Marathon were definitely not on. 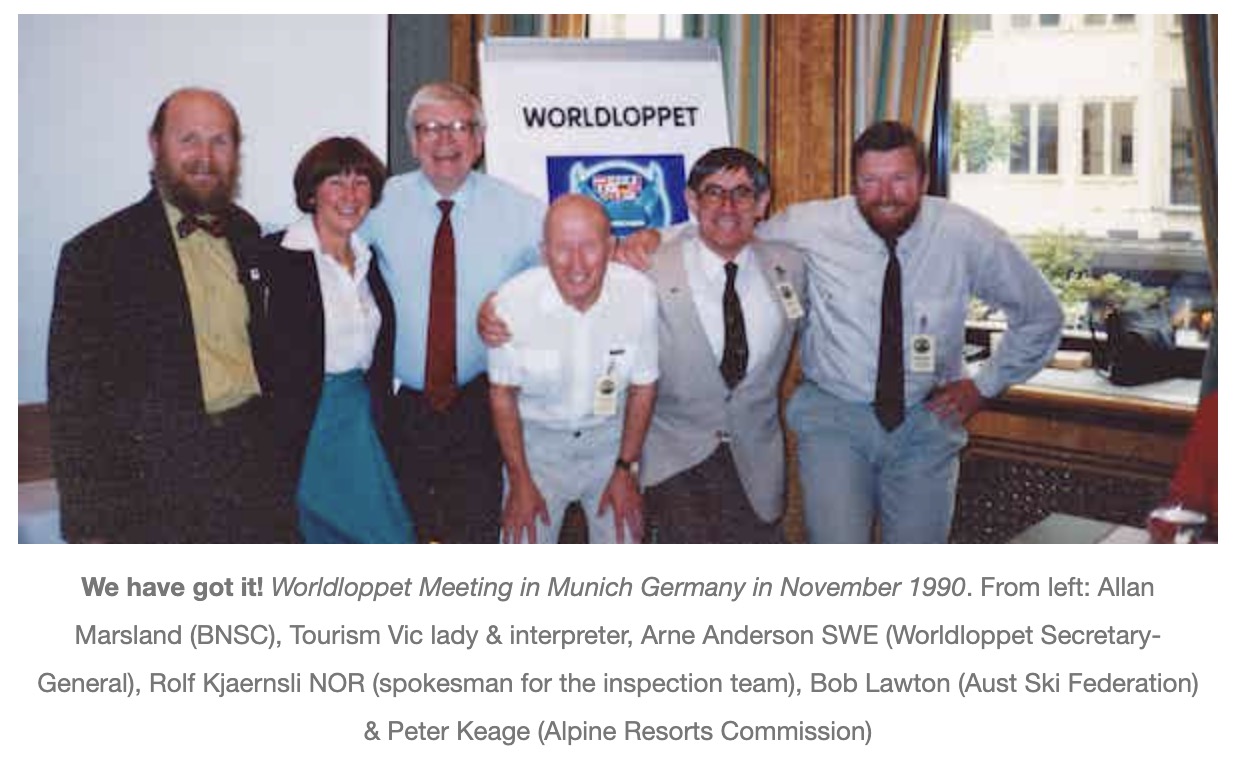